The following article was originally presented at the Highlights Foundation Writers Workshop at Chautauqua. 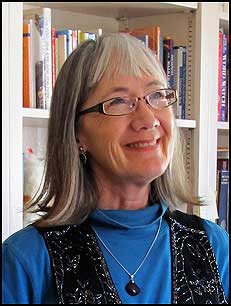 Direct dialogue occurs in a work of fiction whenever the characters speak to one another. Dialogue is not transcribed speech. It is imitation speech, distilled speech. It is created by the author to simulate conversations, musings, utterances that people, being verbal, use constantly throughout their lives.

Charlotte’s Web by E. B. White opens with dialogue:
“Where is Papa going with that ax?” said Fern to her mother as they were setting the table for breakfast.

“Out to the hoghouse,” replied Mrs. Arable. “Some pigs were born last night.”

Quotation marks tell the reader that these words are spoken directly. The identifier following the quotations indicates who is saying the words. Although some authors experiment with omitting quotation marks and creating long, uninterrupted paragraphs of dialogue without punctuation, the example above remains standard form for most children’s books in the United States. Dialogue itself, with short phrases and occasional one-word answers, breaks up the text on a page and makes it more inviting to young readers.

Why use dialogue? To show rather than tell. In the example from Charlotte’s Web, Fern’s question shows the reader what is happening. A description of Fern’s father carrying his ax as he walks to the barn is not necessary. Also, with Mrs. Arable’s answer, the reader knows what has happened during the night.

Dialogue creates a sense of immediacy. Characters are doing something now; they are speaking to each other. They are telling secrets, arguing, revealing their desires, giving orders, warning other characters of danger. Their speech is of the moment and draws the reader in.
Dialogue contributes to characterization by giving clues about the ages and backgrounds of the characters. Dialogue reveals personality. Does the character have a major attitude problem? Is she aggressive, assertive, goody-goody, or bad news? When secondary characters talk about the main character, they add to the reader’s knowledge of the character. Dialogue helps differentiate characters, especially minor ones, and also shows relationships between the protagonist and others.

Plot is another important element of fiction that benefits from dialogue. Foreshadowing in conversation can create tension. In my historical novel Eyes Like Willy’s, the French protagonist, Guy, who will soon be going off to fight in 1915, talks with his sister Sarah about the risks of meeting their Austrian friend, Willy, in battle. When characters comment on what is happening, their conversation helps advance the plot. Also, when characters voice their desires and concerns, they reveal conflict, which is essential to plot.

The setting of a story or novel benefits from dialogue. Characters describe the scene directly and paint pictures in the reader’s mind. A character’s diction, the language he or she uses, gives clues to the time and place.

Through dialogue, the author voices themes. Read the dialogue between Winnie and Tuck in Chapter 12 of Tuck Everlasting and you will be aware of one of the profound themes of the book, that death is a necessary part of life.

Finally, flashbacks, often stumbling blocks to young readers, can be incorporated into dialogue as in the skillful opening of Sarah, Plain and Tall in which the reader learns from Anna’s and Caleb’s conversations that their mother died shortly after Caleb’s birth.

The above are essential uses of dialogue. But how do you actually go about creating dialogue? You can start by paying attention to the content and rhythms of speech, by eavesdropping, by reading dialogue aloud, from your manuscripts as well as from published works, so that you can hear and evaluate the authenticity of this imitation speech.

When writing dialogue, make sure that the reader knows who is speaking. For middle graders and older, it is not necessary to have an identifier in every line of dialogue. Also, it is unnecessary to rack your brain or page through the thesaurus to find variations for “said.” In most cases young readers look only for the character’s name or “he” or “she” to confirm who is speaking and read “said” quite automatically.

You can provide clues to the reader about how the character talks, but avoid detailed descriptions following each quotation.
Use age appropriate speech—six-year-olds do not sound like sixteen-year-olds. Pay special attention to the speech of adult characters. Often adults in children’s books sound stiff and formal. Make certain that your characters don’t sound alike and—most important—that all of them don’t sound just like you, the author.

To create a flow of narrative and dialogue, balance speech and action. If you examine dialogue in notable books, you will find that the conversations are not small talk, are not empty words to fill up the silence, but are carefully woven into the fabric of the story. Nothing brings this home more clearly than studying selected chapters that contain both dialogue and action. First, isolate the dialogue from the narration in the text. Read the snippets of dialogue alone, then read the entire text and examine how the dialogue is inserted into the narration. Observe the pacing, the flow, the balance of dialogue and action, and apply this balancing technique to your own work. (A good example of this balance is Chapter 11 of Because of Winn-Dixie by Kate DiCamillo.)