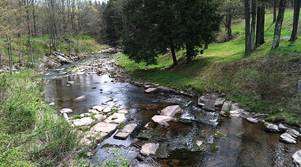 Rich Wallace and Sandra Neil Wallace were on faculty for our workshop, Fact into Fiction: Writing the Historical Novel. We asked them about the pleasures and pitfalls of drawing on real events in crafting this type of story.

You’ve both written contemporary and historical fiction. How do you bring the past to life and infuse it with the same level of energy you would in a novel set in today’s world?
Rich: Whenever and wherever your story is set, you still need compelling, believable characters.

Sandra: A reader may not readily connect to a time period, but they can connect with the turmoil that’s generated by an event. That’s what draws them in. The writer helps make that connection through the characters’ reactions and emotions.

Do historical facts sometimes get in the way of telling a good story?
Sandra: Yes, when you do months and years of research, the tendency is to become attached to what you’ve uncovered and showcase that, often to the detriment of your story. Once you determine where in a timeline your character’s story fits, realize that it’s the relationships and your character’s quest that drive the story. In Muckers, my character Red is battling the blowback from living in post-World War II America, but what drives the story is how he fights his tenuous reality. The “facts” of the 1950 Arizona high school football season—particularly in a small, desert mining town–gave me the background for Muckers. “What really happened” inspired my fictional tale.

Rich: It can take a bit of creativity when a real occurrence has to alter the story, but I don’t believe in changing real, documented events. We can create fictional characters who experience those events, but if it was pouring rain when Joan Baez played at Woodstock, then I’d better know that and my characters better be getting wet. (That happens in a scene from my historical novel War and Watermelon.)

What type of research did you do?
Sandra: I immersed myself in 1950 Arizona through personal interviews, newspapers, oral histories and photographs, to capture the language and points of view of those living through the social injustices, the Communist scare, and the Korean War. Muckers is based on real events, and I was fortunate to be able to interview many of the football players and miners’ children who lived it. But once that groundwork is done, you have to ask the difficult questions–the ones that make people squirm–in order to capture emotions and get at the truth.

Rich: War and Watermelon is set in New Jersey in the summer of 1969. I happen to have been 12 that summer, so the voice and perspective of Brody, who tells the story, is very much my own. His energy and emotions came straight out of me. The trick was to shape the narrative around the actual historic events of that summer, which certainly did not lend themselves to a convenient plot line. The moon landing was in June, Woodstock was in August, the Vietnam protests didn’t really heat up until that fall, and the New York Mets incredible run toward the World Series title only started gaining momentum in late summer. Each of those events plays a role in the story, but the turmoil that drives the novel comes from within the main character.