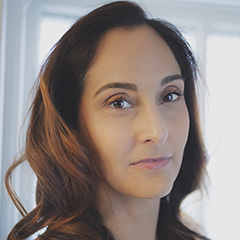 Micol Ostow has been writing professionally since 2004, and in that time has written and/or ghostwritten over 40 works for young readers. She received her MFA in Writing for Children and Young Adults from the Vermont College of Fine Arts, and has taught various sold-out YA and MG writing courses through MediaBistro.com and at Miami Dade College. Many of her students have gone on to publication with projects workshopped with Micol.
Micol’s graphic-hybrid novel, So Punk Rock (and Other Ways to Disappoint Your Mother), was named a 2009 Booklist Top Ten Arts Books for Youth Selection, a Booklist Top Ten Religion Books for Youth Selection, an Independent Publisher Book Awards Silver Medalist in Multicultural Fiction, and a Sydney Taylor Notable Book for Teens. Her most recent release, the horror novel Amity, was hailed by both Buzzfeed and the New York Public Library as one of the top YA horror novels of fall 2014.

She lives and works in Brooklyn, NY, alongside her Emmy Award-winning husband, their daughter, and a finicky French bulldog. Visit her at www.micolostow.com.