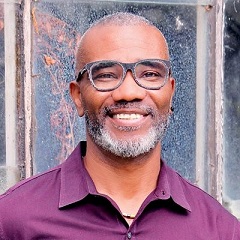 Don Tate is an award-winning author, and the illustrator of numerous critically acclaimed books for children. Books he’s illustrated include Roto and Roy: Helicopter Heroes (Little Brown, 2021); Swish! The Slam-Dunking, Alley-Ooping, High-Flying Harlem Globetrotters (Little Brown, 2020); Carter Reads The Newspaper (Peachtree Publishers); and No Small Potatoes: Junius Groves and His Kingdom in Kansas (Knopf). Books he’s authored and illustrated include Pigskins to Paintbrushes: The Story of Football-Playing Artist Ernie Barnes (Abrams, 2021); William Still and His Freedom Stories: The Father of the Underground Railroad (Peachtree Publishers, 2020); Strong As Sandow: How Eugen Sandow Became the Strongest Man On Earth (Charlesbridge), and Poet: The Remarkable Story of George Moses Horton (Peachtree Publishers).
Don is also a two-time winner of an Ezra Jack Keats Book Award for writing. It Jes’ Happened: When Bill Traylor Started To Draw (Lee & Low Books, 2102) was recognized with an EJK New Writer Honor in 2013, and Poet: The Remarkable Story of George Moses Horton won book award for new writer in 2016). In 2021, William Still and His Freedom Stories: Father of the Underground Railroad won the SCBWI Golden Kite. Don’s forthcoming books include Roto and Roy: To The Rescue (Little Brown, 2023), and Jerry Changed The Game: How Jerry Lawson Revolutionized Video Games (Simon & Schuster, 2023).

Don is a founding host of The Brown Bookshelf, a blog dedicated to advocating for books created by African American youth literature creators. Don lives in Austin, Texas, with his family.

June 15, 2018 | For Beginners, The Business of Publishing
We're giving the blog keys to Don Tate and Carmen Oliver today.  They are co-faculty for our workshop The Journey: ...
By: Don TateCarmen Oliver

Get it Right with Research for Your Nonfiction Picture Book

July 15, 2016 | Nonfiction, Picture Books
Author/illustrator Don Tate made a great post on his blog about tracking down Lonnie Johnson to make sure he got ...
By: Don Tate

Don Tate on Career, Mentorship and the Path to Publication

April 7, 2016 | Community Good News, Nonfiction, Picture Books, The Business of Publishing
We are thrilled to welcome Don Tate to the blog. At a workshop a few years back, Don and I got to talking about ...
By: Don Tate