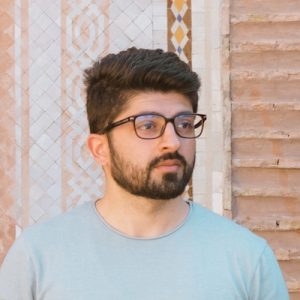 Mustaali Raj is a Vancouver-based art director, graphic designer, and visual artist with a multi-disciplinary practice. His multi-faceted sense of belonging and experiences play an important role in shaping his creative process. He explores intersections of identity, navigating his role and responsibilities as a creative of colour in the North American context. Mustaali’s projects have been internationally recognized by numerous publications, media outlets, and award shows.

“Majority of Islamic content out in the market is one-dimensional, not leaving much room for the imagination. I want to stay true to the core Islamic traditions but still encourage creativity and reader engagement, which is so inherent in the fundamentals of Islam. The goal is not to hinder the wandering mind of a child or spoon-feed everything that we have been traditionally taught. I see this as a great opportunity to expand the visual vernacular of Islamic content out there giving the audience empowered perspectives.

Beyond creating content that resonates with a Muslim audience, those outside the Islamic community also need to hear our perspectives as well. They may feel that the stories are specific only to Muslims and will not end up reading or relating to it. How did Disney manage to create an African-based tale The Lion King that is not just for Africans, but a global phenomenon? It’s about making things relatable to a larger audience but keeping the foundation centered within the Muslim identity. Abstracted concepts and visuals can also play a role in shaping concept-based learning. For example, instead of illustrating a story about a little girl struggling with hijab at school, the same idea can be showcased by a triangle that doesn’t fit into a school of squares.

I also want to bring the connection to nature and creation into my stories. As a child (till today), I have always been drawn towards animals, the natural world, and all living things. Both real and imaginary. Children have this innate ability to not only connect but see themselves in nature. I want to create memorable characters and stories inspired by Islamic myths that spark the imagination of young minds. To nurture the childhood curiosity towards creation and the Creator through an Islamic lens. Muslim children will be able to see their own spiritual teachings and stories reflected in my stories inspired by the natural world.”