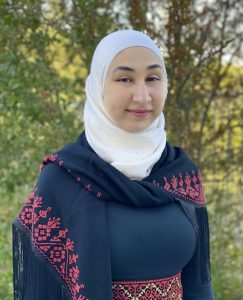 Haneen Oriqat is a Muslim Palestinian-American writer. Along with her writing aspirations, she is dedicated to fostering a career in the publishing industry with the commitment of supporting diverse voices by increasing the visibility of writers of color who have been marginalized. She has worked at the agency level and held various positions in education and the arts, including being hired as a consultant to write and edit a comic book project for The AjA Project.

Haneen received her MFA in Creative Writing with an emphasis in Fiction and Writing for Young People from Antioch University, Los Angeles. She is an alumna of the University of California, San Diego, where she received a BA in Political Science with an emphasis in International Relations and a minor in Literature/Writing while taking extensive courses in Photography. Haneen is also a fellow of VONA/Voices for writers of color.

Haneen was born and raised in San Diego, California. Despite her sarcasm and unhealthy amount of coffee often getting her in trouble, she is always working on a few manuscripts with the dream of becoming a published author.

Haneen is excited about the opportunity for this safe space for Muslims to support each other as they grow in writing and thrive in publishing, leading to a path in which the world will see more books with Muslim characters being centered through a positive lens. She hopes that being part of this program will inspire and motivate others with her shared identity to also share their stories with the world.

“I want my Muslim readers to pick up my books and feel a connection to the characters. I want my Muslim readers to be proud of their faith and identities and be confident in sharing this with the world. I want to normalize seeing Muslim children and teens falling in love with their faith while they navigate the complexities of life, from growing up in immigrant households and striving in school to learning to cope with mental health and understanding that their joy is a form of resistance against all the fear and hate they may face. While they may be growing up in a country that wants to benefit from their cultures without wanting them to feel like they belong, I want Muslim children to read my stories and believe that they are an essential part of the communities that they inhabit. I want them to believe that they can thrive in any field and in life while still being visibly Muslim. I want Muslim children to love who they are.”