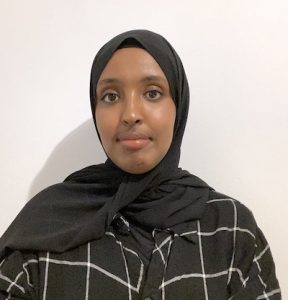 Fatima is an aspiring writer born and raised in Toronto, Canada. Being the oldest sibling of six, she’s always found her quiet place reading and writing. She is currently writing a YA sci-fi about a zombie apocalypse taking place in downtown Toronto. While her days are spent as a Health and Safety Consultant in construction, she spends her nights taking care of her growing plant collection. During her time as Highlights Foundation Muslim Storytellers fellow, she hopes to complete her YA apocalyptic sci-fi and begin the querying process for an isolation thriller. She also hopes to meet like-minded Muslim writers who wish to diversify the Muslim narrative in literature.

“I hope that children can see themselves in my stories that incorporate familiar premises but with Muslim characters. The Muslim community is so diverse but the narratives mostly shown in mainstream media are ones that depict Muslims in a negative light. I hope that Muslim children see themselves in my stories as normal individuals with flaws and everyday struggles. I write my stories with the hopes that Muslim children can just enjoy stories without feeling like they have to question their Muslim identity.”