We’d like to thank Alexandra Villasante for this blog post. Alex is the Highlights Foundation Online Program Manager, and she is also on the faculty for our Latinx Symposium. Find out more about Alex.

My dad always uses the term ‘hispano’ when referring to himself and anyone belonging to the wide and varied diaspora of Latin America, Mexico and Central America. He’s used that term since he emigrated to the United States from Uruguay in the 1970s and he’s not about to change now.

I used to use that term too, until about five years ago when I began using Latinx. As a Spanish speaker, it’s not the most elegant word; we don’t pronounce ‘x’ the same way English speakers do; I have to switch pronunciation mid-sentence to English to say the word, then back to Spanish to finish my thought.

In addition to being an awkward word to use in Spanish, I’ve heard lots of people, Latinx and otherwise, complain that the word sounds ‘antiseptic’ or ‘cold’ or that they just don’t like it; while others prefer the term Latine when searching for gender inclusive language (more on that later). Some believe the use of the “x” originated in the U.S. ignoring evidence of its early use in Latin America by queer folks.

Whatever the reason, the beautiful and frustrating thing about language is that it changes and evolves. It evolves and adapts as we evolve and adapt (did you know that the word ‘bully’ used to mean superb? And ‘awful’ meant commanding awe?)

But there are very good reasons to use Latinx or Latine in place of (or in addition to) Hispanic, particularly when we talk about Hispanic Heritage Month. One, because the terms are not interchangeable. Hispanic refers to the language primarily spoken in that country as a result of colonization. While Uruguay would be a Hispanic country, Brazil (colonized by Portugal) would not. Yet, I have cousins in both Uruguay and Brazil and the countries share a border and are close in economy and culture.

The term Latinx is also not gendered, allowing for greater expression of a gender spectrum beyond Latino or Latina. In a gendered language like Spanish (and no, Latinos is not gender neutral), it’s difficult to be gender inclusive. Many linguists, academics and translators working with the Spanish language are experimenting with words that can sound both authentic and inclusive, like Latine.

So, as writers for children, how does this conversation impact the children we write for? Why should we care if it’s Hispanic or Latinx or something else? Because to foster the kind of inclusivity and representation we want for children – the kind that allows space for their identities without causing harm – I believe we need to extend that kind of inclusivity to our community of writers. We want more manos a la obra – more hands doing the work of making publishing equitable. Part of that is how we think of language and of who we think of as belonging to this community.

Like any umbrella term Hispanic, Latinx, Latine all have positives and negatives. In a community as vast and diverse as ours, there will never be one word that can exactly encompass us all, nor should there be.

Is Latinx or Latine perfect? No, but it’s a start. Will another term come around in a few years that might work better? Absolutely! As we keep looking for the right words to express our changing world, I hope we can stay open to the idea that language should be something we use to invite all children in to our world, not as a barrier that keeps some out. That’s the beauty of language.

For reference:
What’s Liberating, Not Limiting About Using The Term Latinx

Alex Villasante will be joining Mia García , NoNieqa Ramos , Ismée Williams , and Hilda Eunice Burgos at our next #HFGAther:Free Virtual Conversation & Celebration set to Amplify Latinx Voices in the Kidlit Community During Latinx & Hispanic Heritage Month. To join us on Wednesday, September 15 at 7pm Eastern, register for free here. 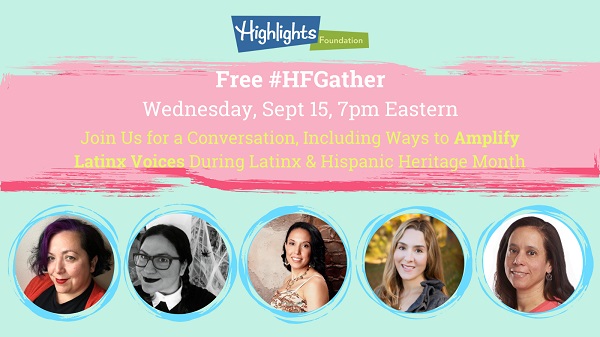