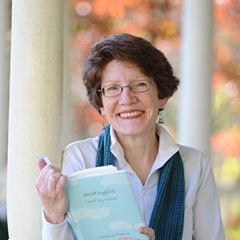 Special Guest
Kathy spent fifteen years as a lawyer before turning to her first love: writing. She was lucky to work with Patricia Gauch and her debut novel, Quaking, was one of YALSA’s Top Ten Quick Picks for Reluctant Young Adult Readers. Her novel Mockingbird won the 2010 National Book Award for Young People’s Literature, and her other novels include The Absolute Value of Mike, a Crystal Kite winner, Seeing Red, a Jane Addams Award honor book, and The Badger Knight which published in fall 2014. Kathy has lived all over the world, from The Netherlands—where she was born—to Israel, South Africa, Scotland, Canada, and the United States. Her life has been filled with rich experiences, from a Hogwarts-like boarding school (minus the magic) to the African bush (complete with lions) to an ice-filled harbor. Read more about Kathy at www.kathrynerskine.com.

Novel Writing with Patti Gauch 2020
March 14, 2020
“What an experience! I got more substantive feedback on my writing and illustrating in one week than in the previous eight years. Now I’m equipped to recraft my pieces so they’ll work, and I also feel encouraged as an author and illustrator. I’m headed in the right direction, and I won’t give up the dream.”
- Lynn Champagne Ogden, UT