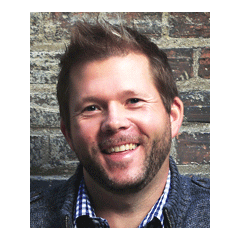 Teaching Assistant Merrill Rainey is the creator and owner of LittleRainey Illustration & Design, which is a children’s illustration and design studio based out of Northwest Ohio. Merrill is an award winning illustrator, designer, and paper engineer. His work can be found in numerous children’s magazines nationwide.

Merrill is most known for his brand character work for both “Jack and Jill” and “Humpty Dumpty” magazines, as well as his cut paper illustrations, and paper toy creations.  He is a two-time recipient of the Highlights magazine Pewter Plate award for best illustration, a four-time recipient of letters of merit for the SCBWI Magazine Merit award, and is the illustrator coordinator for the Northern Ohio chapter of the SCBWI. His client list includes industry names such as Capstone Publishing, Highlights, Ladybug magazine, Learning A-Z, McGraw Hill Education, Scholastic, and Spider Magazine.