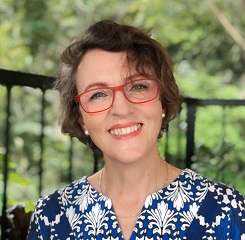 Special Guest
Jane Houng is a long-term resident of Hong Kong and China. She received an MFA in WYCA at Vermont College of Fine Arts in the US in 2014. Since then, she has published seven children’s books for The Commercial Press Hong Kong and Sing Tao Publishing Ltd, including the YA novel Bloodswell (2012), the middle grade books Pun Choi: a Hotchpotch of Chinese Folk and Fairy Tales (2016); Cat Soup and Other Short Stories (2016); Hong Kong Movers and Shakers (2017); Hong Kong History Girl (2018), and the picture book Asian Elephant Art (2022). She has also published with Oxford University Press, Pearson Publishing and The Asian Review of Books.

Tragically, late 2017, Jane lost her 30-year old daughter, Rebecca Dykes to rape and murder. Since then, she has established a charity in Greece called Becky’s Bathhouse for refugees (www.beckysbathhouse.org), launched a free panic button for very vulnerable women around the world called Becky’s Button, and set up a community for kidlit writers theming extreme violence (www.rebeccadykeswriters.com). The Rebecca Dykes Memorial Workshop this is the first of what Jane hopes will become an annual event. Her memoir Beirut is More Beautiful by Bike will be published in Arabic in Lebanon by Dal El Machreq in 2023.

Writing Stories to Empower Through Trauma: A Workshop in Memory of Rebecca Dykes
November 2, 2022
“What an experience! I got more substantive feedback on my writing and illustrating in one week than in the previous eight years. Now I’m equipped to recraft my pieces so they’ll work, and I also feel encouraged as an author and illustrator. I’m headed in the right direction, and I won’t give up the dream.”
- Lynn Champagne Ogden, UT