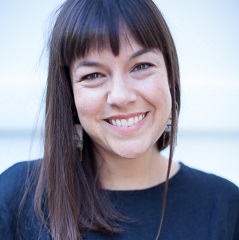 Special Guest
Nina LaCour is the bestselling and Michael L. Printz Award-winning author of five critically acclaimed young adult novels published by Dutton Books: We Are Okay, Watch Over Me, Hold Still, The Disenchantments, and Everything Leads to You. She is also the co-author of You Know Me Well, a novel written in collaboration with David Levithan and published by St. Martin’s Griffin, and a contributor to numerous anthologies, including Summer Days and Summer Nights, edited by Stephanie Perkins. Her first novel for adults, Yerba Buena, came out from Flatiron Books in early 2022, along with her first picture book, Mama and Mommy and Me in the Middle, from Candlewick.

Born and raised in the East Bay, Nina crossed the bridge to receive her undergraduate degree from San Francisco State University, and then crossed back to Oakland to receive an MFA in Creative Writing at Mills College. Her graduate thesis became her first novel, Hold Still, which received a William C. Morris honor from the American Library Association.

Nina was raised with an appreciation for the arts and a commitment to education. Her grandmother taught china painting classes; her father was a teacher and then school principal; and her mother taught high school art. Nina tutored her way through college, taught English composition to undergraduates while in grad school, and then went on to teach at Berkeley City College and Maybeck High School.

After taking a few years off to stay home with her young daughter, Nina is teaching again with Hamline University’s MFAC program as well as with independent students. She thrives on lesson planning and lecture writing, classroom discussions, guiding students through their short story and novel drafts, and offering interactive lectures on craft and creativity. She has taught, guest lectured, and appeared at conferences and conventions all around the country and internationally. Her novels have been Junior Library Guild selections, ALA Best Books for Young Adults, and have been named among the best books of the year by the Boston Globe, Seventeen, Booklist, Bustle, Publishers Weekly, and the New York Public Library among others. Nina won the 2009 Northern California Book Award for Children’s Literature, was featured in Publishers Weekly as a Flying Starts Author, and has had her novels translated into over a dozen languages.

Nina loves cooking, gardening, and daytripping through the ever-inspiring regions of Northern California with her wife and their daughter. She lives in San Francisco.

Line Editing Your YA or MG Novel (Fall 2022)
September 13, 2022
“Attending the workshop not only gave me deeper insight into writing, but it established new friendships and broadened my feeling of professionalism and capabilities. It was wonderful to get together with other writers who were more than willing to share their expertise and experiences.”
- Lori Mortensen Cameron Park, CA