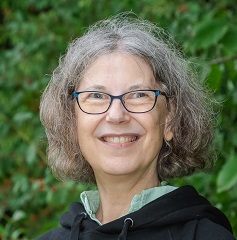 Lyn Miller-Lachmann is the former editor in chief of Multicultural Review. Her young adult novel Gringolandia was a 2010 ALA Best Book for Young Adults and was named an Américas Award Honor Book from the Consortium of Latin American Studies Programs. She is also the author of Surviving Santiago and Rogue and the co-author with Zetta Elliott of the 2022 middle grade verse novel Moonwalking, the story of an interracial friendship in Brooklyn, NY, in 1982. Her forthcoming works of fiction include the YA historical novel Torch, set in the aftermath of the 1968 Soviet invasion of Czechoslovakia, and the picture book Ways to Play, where an autistic child shows that the right way to play with toys is any way you want. Her nonfiction publications include a biography of animal scientist and autism advocate Temple Grandin in the She Persisted chapter book series and Film Makers: 15 Groundbreaking Women Directors, co-authored with Tanisia “Tee” Moore in the Women of Power series. In addition, she translates children’s books from Portuguese and Spanish to English.

Summer Camp in Fiction: Explore, Play, and Inspire
July 5, 2022
“What an experience! I got more substantive feedback on my writing and illustrating in one week than in the previous eight years. Now I’m equipped to recraft my pieces so they’ll work, and I also feel encouraged as an author and illustrator. I’m headed in the right direction, and I won’t give up the dream.”
- Lynn Champagne Ogden, UT