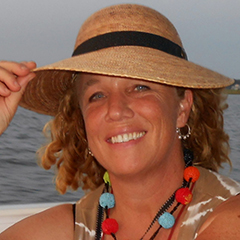 Ashley Wolff has been a visual artist since she declared herself one at the age of five. She grew up in Middlebury, Vermont, and holds a BFA from Rhode Island School of Design. Ashley is the author and/or illustrator of over sixty children’s picture books, including Baby Bear Sees Blue, Stella and Roy Go Camping, Baby Beluga, and the beloved Miss Bindergarten series. She works in a variety of media and is eager to share what she has discovered from thirty years of playing with color and light. Every summer Ashley teaches writing and introduction to media in the Children’s Picture Book Writing & Illustration MFA and certificate programs at Hollins University. For thirty years one of Ashley’s favorite pastimes has been traveling to schools all over the United States, speaking to children about writing, drawing, and using their imagination to help them find their paths to the future. She lives and works in San Francisco, California, and Leicester, Vermont.