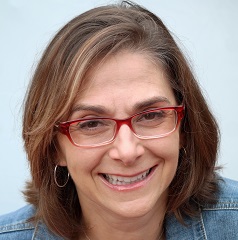 Laura Shovan is a children’s author, educator, editor, and Pushcart Prize-nominated poet. Laura’s debut novel-in-verse, THE LAST FIFTH GRADE OF EMERSON ELEMENTARY, won multiple awards, including NCTE Notable Verse Novel. Her novel TAKEDOWN was selected for Junior Library Guild, PJ Our Way, and the ALA’s Amelia Bloomer Project. A PLACE AT THE TABLE, written with author/activist Saadia Faruqi, was named a Sydney Taylor Notable in 2021. Laura’s books have appeared on multiple state lists. She is a longtime poet-in-the-schools in her home state of Maryland and a regular Poetry Friday blogger. Her writing for children appears in many anthologies, most recently HOP TO IT: POEMS TO GET YOU MOVING (Pomelo, 2020) and COMING OF AGE: 13 B’NAI MITZVAH STORIES (Whitman, 2022).