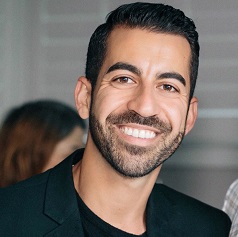 Born and raised in Los Angeles, Arya earned his BA in Psychology at UC San Diego, and a master’s in Organizational Behavior from NYU. In 2015, he returned to LA after ten years between San Diego, Tel Aviv, and D.C., encouraged by his ability to fully come out as a gay man to his family. Soon after, Arya began a body of work he had dreamt of advocating for the full equality of LGBTQ+ people and community. Twelve years into his non-profit career, he currently serves as the Managing Director of JQ, an LGBTQ+ and Jewish organization focused on education, outreach, and support in service of inclusion and equality for all. In 2017, Arya launched the JQ Persian Pride Fellowship, an interfaith LGBTQ+ and ally initiative training the next generation of leaders. His dedication to the Jewish and LGBTQ+ communities earned him a spot on LA Jewish Journal’s 30 Under 30 list, IranWire’s 50 Iranian-Americans You Should Know, and most recently the 2019 JPro Young Professional Award.