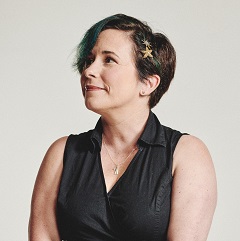 Fran Wilde’s novels and short stories have been finalists for four Nebula Awards, a World Fantasy Award, and two Hugo Awards, and include her Nebula- and Compton-Crook-winning debut novel Updraft, its sequels Cloudbound, and Horizon, her double-starred debut middle grade novel Riverland, and the Nebula-, Hugo-, and Locus-nominated novelette The Jewel and Her Lapidary. Her short stories and nonfiction essays appear in Asimov’s, Tor.com, Nature, and The Washington Post and The New York Times. Fran is Director of the MFA for Genre Writing at Western Colorado University.