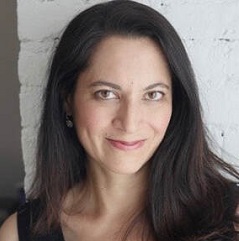 Special Guest
Veera Hiranandani is the author of The Night Diary (Kokila), which has received many awards including the 2019 Newbery Honor Award, the 2019 Walter Dean Myers Honor Award, and the 2018 Malka Penn Award for Human Rights in Children’s Literature. The Night Diary has been featured on NPR’s Weekend Edition, is a New York Times Editor’s Choice Pick, and was chosen as a 2018 Best Children’s Book of the Year by The New York Times, The Washington Post, NPR, Amazon, School Library Journal, and Kirkus Reviews. She is also the author of The Whole Story of Half a Girl (Yearling), which was named a Sydney Taylor Notable Book and a South Asia Book Award Highly Commended selection, and the chapter book series, Phoebe G. Green (Grosset & Dunlap). She earned her MFA in fiction writing at Sarah Lawrence College. A former book editor at Simon & Schuster, she now teaches creative writing at Sarah Lawrence College’s Writing Institute and is working on her next novel.