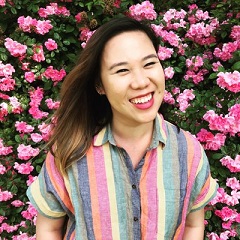 Special Guest
Tiff Liao is an editor at Henry Holt Books for Young Readers. She’s had the pleasure of editing authors such as Tomi Adeyemi, Margaret Owen, Jess Rothenberg, K.D. Halbrook, Rhoda Belleza, Henry Lien, Kristin O’Donnell Tubb, Tochi Onyebuchi, and Lesley Livingston, among others. She acquires young adult and middle grade fiction of all stripes, as well as the occasional nonfiction title. A Bay Area native, Tiff now resides in Brooklyn where she continues to pine for a good avocado. She (mostly) tweets about bookish things at @tiff_liao.

Filling the Writer's Toolbox With Editor Emma Dryden 2020
October 10, 2020
“What an experience! I got more substantive feedback on my writing and illustrating in one week than in the previous eight years. Now I’m equipped to recraft my pieces so they’ll work, and I also feel encouraged as an author and illustrator. I’m headed in the right direction, and I won’t give up the dream.”
- Lynn Champagne Ogden, UT