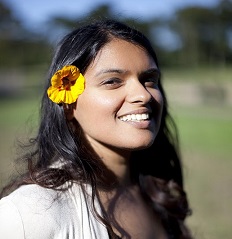 Nidhi Chanani is a freelance illustrator, cartoonist and writer. She is the owner of Everyday Love Art. Her debut graphic novel, Pashmina, was released by First Second Books in October 2017. It received starred reviews in the School Library Journal, Publisher’s Weekly, and was reviewed in the New York Times. She illustrated Misty–The Proud Cloud, a children’s book by Hugh Howey. She is an instructor in the Master of Fine Arts, Comics program at the California College of Arts. Her first bilingual board book, Shubh Raatri Dost/Good Night Friend will release in October 2018 with Bharat Babies. Also in October, her graphic novel, Jasmine’s New Pet, which she wrote, drew and colored will release with Dark Horse Comics. She is currently working on her second original graphic novel, Jukebox, with her husband Nick Giordano.

Nidhi was born in Calcutta and raised in suburban southern California. She holds a degree in Literature from the University of California, Santa Cruz. She creates because it makes her happy–with the hope that it can make others happy, too. In April of 2012 she was honored by the Obama Administration as a Champion of Change.

Her media appearances include CNN’s Anderson Cooper 360 and BBC Radio. Her work has been featured on the Huffington Post, the Women’s March, My Modern Met, Bored Panda and India Times. Nidhi has worked with Disney, ABC, Airbnb, Sony, Microsoft, State Farm Insurance and a variety of other clients. Her non-fiction comics have appeared in the Nib. Everyday Love Art products are sold in retail shops across the country, including the San Francisco International Airport, Books Inc., and Therapy stores.

Nidhi draws and dreams every day with her husband, daughter and their cat in the San Francisco Bay Area.