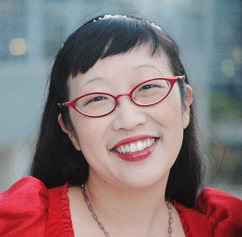 Special Guest
Paula Yoo is an author, screenwriter, and musician. Her latest YA non-fiction book, From a Whisper to a Rallying Cry: The Killing of Vincent Chin and the Trial that Galvanized the Asian American Movement (Norton Young Readers 2021), is a Junior Library Guild Gold Standard Selection and has received 5 *Starred reviews from Kirkus Reviews, ALA/Booklist, Horn Book, Publishers Weekly and School Library Journal. Her other books include the YA novel Good Enough (HarperCollins 2008), an Asian/Pacific American Award for Youth Literature honor book, and the IRA Notable picture book biographies Sixteen Years in Sixteen Seconds: The Sammy Lee Story, Shining Star: The Anna May Wong Story, and Twenty-two Cents: Muhammad Yunus and the Village Bank from Lee & Low Books. She has also written three books for Lee & Low’s “Confetti Kids” early reader series and is working on a chapter book series for them. As a TV writer/producer, her credits range from NBC’s The West Wing to The CW’s Supergirl, and she has sold multiple TV pilots and feature scripts. She is also a former journalist (The Seattle Times, The Detroit News, and PEOPLE Magazine). When she’s not writing, Paula is a professional freelance violinist who has played and toured with orchestras and such national recording acts as No Doubt, Il Divo, Fun, and Love. Website: https://paulayoo.com