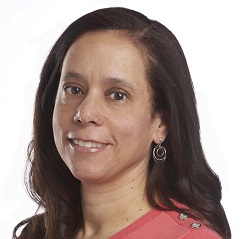 Hilda Eunice Burgos is the author of the middle-grade novel Ana María Reyes Does Not Live in a Castle, which was recognized as an ALA Notable Children’s Book and received two starred reviews, and the picture book The Cot in the Living Room, illustrated by Gaby D’Alessandro, which is a Junior Library Guild selection and received a starred review. Her second middle-grade novel, Miosotis Flores Never Forgets, will be released on October 26. The daughter of immigrants from the Dominican Republic, Hilda grew up in New York City as one of four sisters. She now lives near Philadelphia, where she and her husband raised their two children and where she works as a lawyer.