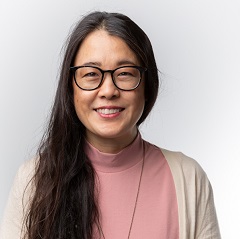 Ellice Lee (she/her) is VP, Senior Art Director of Philomel/Viking/Flamingo Books and has been at Penguin Young Readers for 5 years and in publishing for 18. She manages a design team of 6 and designs for all ages—from board books to picture books, chapter books to YA novels, and both fiction and non-fiction. Ellice has worked with award-winning talent including Alexandra Boiger, Rafael Lopez, Loren Long, Le Uyen Pham, Christian Robinson, Kadir Nelson, Angela Dominguez, Ed Young, and Floyd Cooper. Titles she has worked on have appeared on the New York Times best-seller lists, such as Just Ask! by Sonia Sotomayor and She Persisted by Chelsea Clinton, featured in New York magazine, TIME magazine and have won Caldecott honors, Coretta Scott King awards, as well as being a finalist for the National Book Award. Ellice loves working with talent who have a compelling story to share—from the political to the social to the inane.