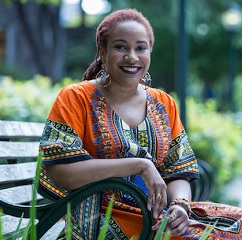 Born and raised in Detroit, Michigan, Dr. Ebony Elizabeth Thomas taught in public schools for several years after graduating from Florida A&M, a historically Black university in Tallahassee, Florida. After earning her doctorate from the University of Michigan in 2010, she returned to her master’s degree institution, Wayne State University, as an assistant professor of Reading, Language, and Literature in the College of Education. In July 2012, she came to Penn GSE, where she is Associate Professor in the Division of Literacy, Culture, and International Education. Her program affiliation is Reading/Writing/Literacy.
Dr. Thomas has written and co-authored more than 25 articles and book chapters in numerous academic journals and edited volumes. She has also published two books: Reading African American Experiences in the Obama Era: Theory, Advocacy, Activism (Peter Lang, 2012), and The Dark Fantastic: Race and the Imagination from Harry Potter to The Hunger Games (NYU Press, 2019). She currently serves as co-editor of the NCTE journal Research in the Teaching of English.

Her expertise on race and representation in children’s and young adult literature has been sought after nationally and internationally. She has been interviewed by MSNBC, the BBC, the New York Times, the Philadelphia Inquirer, and the Chicago Tribune, to name a few. She is a former reviewer for Kirkus’ children’s book section, and has written book reviews for the Los Angeles Times. She is a past National Book Award for Young People’s Literature judge (2020), and is a 2020-2022 member of the United States Board on Books for Young People.