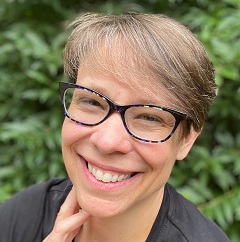 Dana Meachen Rau has written more than 350 books for children in a variety of genres—early readers, picture-books, historical fiction, cookbooks, and nonfiction on scientific, historical, geographical, and other topics. Most recently, she has written many biographies for Penguin Workshop’s popular Who Was? series.
Her early reader Robot, Go Bot! (Random House), was included on Kirkus’s list of Best Children’s Books of 2013, named an ALSC 2014 Notable Children’s Book, and listed by Bank Street as one of the 2014 Best Books of the Year. Other accolades include: The Inside Story (Marshall Cavendish), named one of Booklist’s Top 10 Early Literacy Series; Our Solar System Series (Compass Point Books) winner of Learning Magazine’s Teachers’ Choices Award; and A Star in My Orange (Millbrook Press) named one of Booklist’s Top 10 Sci-Tech Books of the Year.

Since graduating from Trinity College in Hartford, Connecticut, with degrees in both creative writing and art history, she has worked in the publishing world as a writer, illustrator, and editor of both fiction and nonfiction. Since attending Vermont College of Fine Arts for her master’s degree in Writing for Children and Young Adults, she has taught creative writing at the Mark Twain House, Hartford, CT, academic writing and literature at the University of Hartford, and creative classes at local arts centers.