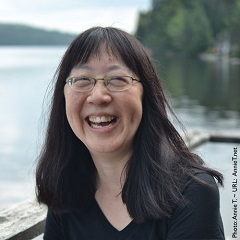 Once upon a time, Debbie Ridpath Ohi was a computer programmer/analyst but hurled herself off the corporate cliff to embrace the arts. She has always loved to write and draw but never imagined she could make a living at it. After many rejections, Debbie got her first big break at an SCBWI conference when Simon & Schuster publisher/editor Justin Chanda saw her portfolio and offered Debbie a book illustration contract. Since then, she has more than 20 books published and her illustrations have appeared in books by Michael Ian Black, Judy Blume, Aaron Reynolds, Rob Sanders and Lauren McLaughlin, among others. Debbie is the author and illustrator of Where Are My Books? and Sam & Eva. She has worked with Simon & Schuster, HarperCollins, Random House, Stone Bridge Press and Little, Brown. Her newest picture book is I’m Sad, written by Michael Ian Black and illustrated by Debbie: a sequel to New York Times Notable Children’s Book, I’m Bored.