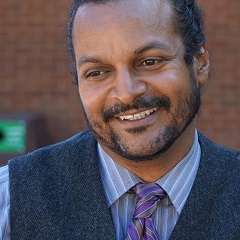 Tony Medina, two-time winner of the Paterson Prize for Books for Young People (DeShawn Days and I and I, Bob Marley), is the author/editor of eighteen books for adults and young readers, the most recent of which are I and I, Bob Marley (2009), My Old Man Was Always on the Lam (2010), finalist for the Paterson Poetry Prize, Broke on Ice (2011), An Onion of Wars (2012), The President Looks Like Me & Other Poems (2013) and Broke Baroque (2013), finalist for the Julie Suk Book Award. He has received the Langston Hughes Society Award; the first African Voices Literary Award; and was nominated for Pushcart Prizes for his poems, “Broke Baroque” and “From the Crushed Voice Box of Freddie Gray.” Medina, whose poetry and prose appears in over 100 anthologies and literary journals, is the first Professor of Creative Writing at Howard University. Jacar Press of North Carolina recently published his anthology, Resisting Arrest: Poems to Stretch the Sky, on police violence and brutalities perpetrated on people of color. Tu Books will publish Medina’s debut graphic novel, I Am Alfonso Jones, in 2017. Penny Candy Books will publish his latest book for young people, Thirteen Ways of Looking at a Black Boy, February 2018. Medina’s other books for young readers are Christmas Makes Me Think (2001), Love to Langston (2002) and Follow-up Letters to Santa from Kids who Never Got a Response (2003). He was recently featured on the NBC philanthropist show, Give, produced by Blair Underwood and hosted by Jenna Bush Hager.