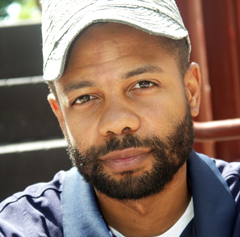 Javaka Steptoe is an eclectic young artist, designer, and illustrator, building a national reputation as an outstanding contributor to the genre of children’s literature. His debut work, In Daddy’s Arms I Am Tall: African Americans Celebrating Fathers, earned him the Coretta Scott King Illustrator Award, a nomination for Outstanding Children’s Literature Work at the 1998 NAACP Image Awards, a finalist ranking for the Bluebonnet Award for Excellence in Children’s Books, and countless other honors. His books, Do You Know What I’ll Do? authored by Charlotte Zolotow and A Pocketful of Poems authored by Nikki Grimes, received starred reviews from both Publishers Weekly and the ALA Booklist. Hot Day on Abbott Avenue, written by Karen English, received the 2005 Jane Addams Children’s Book Award. Steptoe is also the author/illustrator of The Jones Family Express. His most recent illustration projects include Rain Play by Cynthia Cotten, published in 2008 and Amiri and Odette: A Love Story by multi-award winning author Walter Dean Myers.

Having earned his Bachelor of Fine Arts degree from The Cooper Union for the Advancement of Science and Art, Steptoe is very committed to children’s education, making appearances at various schools, libraries, museums, and conferences across the country, including the American Library Association, the International Reading Association, and Reading is Fundamental, Inc.