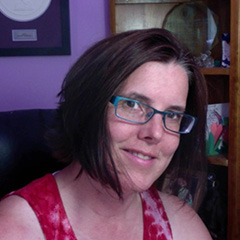 Alma Fullerton was born in Ottawa, Ontario, as one of seven children. Her dad was in the military so they moved when his postings changed, first to Trenton when she was two, then to Comox when she was twelve. Having a learning disability, she couldn’t read until grade four and didn’t enjoy reading at all until grade nine, when she discovered books that she really loved. Now that she is as an award-winning author, Alma visits schools to teach children that they, too, can overcome any obstacle. Her first four books are: In the Garage (2006); Walking on Glass (2007), which was named to the 2008 YALSA Quick Pick list; Libertad (2008), which has won and was a finalist for many awards, including the 2008 Governor General’s Literary Award for Children’s Literature (finalist), the 2009 TD Canadian Children’s Literature Award (finalist), the 2009 Ruth & Sylvia Schwartz Children’s Book Award (winner), the 2009 CLA Children’s Book of the Year Honor Book, the 2009 Golden Oak Award (winner), the 2009 Once Upon a World Children’s Book Award (winner), and the 2010 Silver Birch Award (shortlist); and BURN (2010) which was a finalist 2011 TD Canadian Children’s Literature Award , 2011 CLA Children’s Book of the Year finalist, and is on the 2011/12 Rocky Mountain Award shortlist.