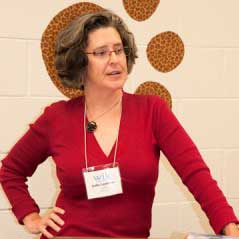 Kathy Landwehr is the Vice President and Associate Publisher of Peachtree Publishers. She graduated from Emory University with a degree in English. After brief stints at the Atlanta Journal-Constitution and Susan Hunter Publishing, she joined the staff of Peachtree Publishers in 1990. Initially hired as publicist, she became marketing and publicity manager in 1992. In 1995, she moved over to the editorial and production departments and eventually became Associate Publisher and then Vice President, proving that if you hang around long enough, they’ll have to promote you. Her responsibilities include acquiring and developing manuscripts, from picture books to young adult; overseeing the development of the company’s lists; negotiating contracts; and supervising the work of the other editors.