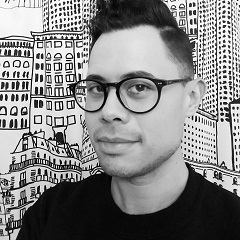 Mike Curato is the author and illustrator of everyone’s favorite polka-dotted elephant, Little Elliot. His debut title, Little Elliot, Big City (Henry Holt Books for Young Readers, Macmillan), released in 2014 to critical acclaim, has won several awards, and is being translated into eleven languages. Mike loves illustrating and writing almost as much as he loves cupcakes and ice cream (and that’s a LOT!). Other books in the series include Little Elliot, Big Family and Little Elliot, Big Fun, with a fourth book coming out in 2017. Meanwhile, Mike had the pleasure of illustrating Worm Loves Worm by J.J. Austrian, and All the Way to Havana by Margarita Engle. He is also working on several other projects, including his first graphic novel.