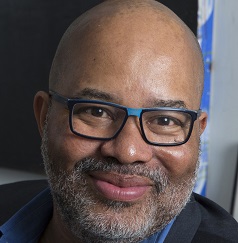 James E. Ransome is the award-winning illustrator of over 60 picture books. He has been illustrating books, book jackets, greeting cards and magazines for over 25 years. Awards for his illustrations include the Coretta Scott King and NAACP Image awards. James received his Bachelor of Fine Arts degree in Illustration from Pratt Institute in New York. In 2016, the MTA Metro-North Railroad selected James to illustrate one in a series of posters for the New York City subway system. James’ work is part of both private and public children’s book art collections and a number of commissioned murals, including three for the Underground Railroad Museum in Cincinnati, Ohio. James lives in Rhinebeck, New York with his wife, author, Lesa Cline-Ransome and their four children.