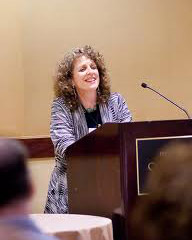 After working and traveling around Europe after college and working in different jobs in New York City, Marcia Wernick finally found her calling in children’s publishing. She began working at the Sheldon Fogelman Agency in subsidiary rights, advancing to director of subsidiary rights. She has attended the Bologna Children’s Book Fair more than a dozen times, enjoying the international camaraderie of the children’s book industry. When she realized that working directly with the authors and illustrators brought her the most joy, she focused on the agenting side of the business. She became a fulltime agent, bringing in many authors and illustrators to the agency. Among the clients she brought in, and with whom she continues to work, are Bryan Collier, Elizabeth Cody Kimmel, Kathleen O’Dell, Jackie Urbanovic, Alexandra Boiger, and Mo Willems, whom she introduced to the children’s book publishing world. Her clients now range from the well-established to those just beginning their careers. She continues to use her subsidiary rights experience by handling the foreign rights side of Wernick & Pratt Agency and working with film agents on the licensing of motion picture/television rights. She has had great fun licensing merchandising rights such as ringtones, game apps, plush dolls, pajamas, backpacks, toys, and games. She is accepting new clients in all genres for children.