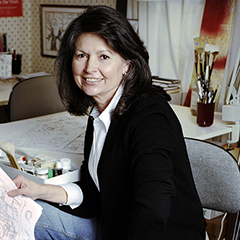 Trinka Hakes Noble is the award-winning author of over thirty picture books, including The Scarlet Stockings Spy (IRA Teachers’ Choice 2005), The Last Brother, The Legend of the Cape May Diamond, The Legend of Michigan and Apple Tree Christmas, which she wrote and illustrated. Other titles include The Orange Shoes (IRA Teachers’ Choice 2008), The Pennsylvania Reader, The New Jersey Reader, Little New Jersey, Little Pennsylvania and The People of Twelve Thousand Winters. Ms. Noble also wrote the ever-popular Jimmy’s Boa series and Meanwhile Back at the Ranch, both featured on PBS’s Reading Rainbow. Her many awards include ALA Notable Children’s Book, Booklist Children’s Editors’ Choice, IRA-CBC Children’s Choice, Learning: The Year’s Ten Best, plus several state reading awards and Junior Literary Guild selections.

Her latest titles are The Legend of the Jersey Devil, and Lizzie and the Last Day of School. Forthcoming in 2016 is The Legend of Sea Glass and in 2017 The Ragamuffin Parade, part of the Tales of Young Americans series by Sleeping Bear Press.

Ms. Noble is on the board of The New Jersey Center for the Book and a member of the Rutgers University Council on Children’s Literature. In 2002 she was awarded Outstanding Woman in Arts and Letters in the state of New Jersey for her lifetime work in children’s books, along with letters of commendation from the US Senate, the US House of Representatives, and the US Congress.