We’d like to thank Kathi Appelt for this blog post! She was co-facuty with Lindsey Lane for Unlocking Your Story: Forms and Genres, a Mashup and she is co-faculty, along with Grace Lin and Padma Venkatraman, at our upcoming course Bringing Your Plot to Life: A Two-Part Mini for Novelists.

When it comes down to a story, we know to dive into characters, setting, plot, point of view, style, all those ingredients that a story needs, but one of the most overlooked and underthought  elements is form.

What is it? And how does it affect our work? The great philosopher Susanne Langer wrote an entire treatise on it in her famous book, Feeling and Form. In it, she makes the case that form comes from the expression of the life patterns and rhythms that arise from the artistic subject at hand. While Langer concentrated largely on form in musical expression, writers of prose and poetry can take away some of her key ideas and apply them to our own works, with the goal being to produce, in our art, the biological sense that the form is intuitive.

But what the heck does that mean? Let’s start by just thinking about what form is. Just on the very surface, we can say that it’s the structure of something, although that’s not as helpful as it might seem. Everything basically has some sort of underlying structure. Even water and air have their own molecular structures.

In literature, some genres are even named for their structures. A novel-in-verse is both a form and a genre. Picture books are too. Same with poetry. But what do we do with that?

The poets have had ideas for ages, right? Every poet spends a large part of their time studying the forms. There’s a sonnet, a sestina, a villanelle, etc. On the outside, most of the forms depend upon math. Each line or two or three is constrained by a mathematical formula. In some cases, we even boil it down to numbers of syllables, as in haiku and tanka. Fair enough.

But let’s take a closer look.

In fact, let’s look at a sestina. Here we have a hard and fast outer structure—thirty-nine lines, with a strict pattern of end words (look it up), in an alternating series of six stanzas of six lines, culminating in a doubling up of the six words in the last three lines. If we were to “draw” a sestina, it might look like a whirlpool.

Once we can see the structure, Langer whispers to us…“now move to feeling.” A whirlpool, by its nature, makes us dizzy, it sets us to spinning, makes us feel whirled about. So, to use the form of a sestina gives us an opportunity to explore dizziness, both in subject and in theme. If we’ve done it well, the form feels inextricable from the subject. It’s intuitive.

As well, the form becomes an actual sub-text. We often feel dizzy in the reading of a sestina, and if we’ve done our jobs, if we’ve really tapped in to the power of the form, anyone reading our sestinas will have the biological feeling of being spun around, so that by the end, we’re somewhat breathless. 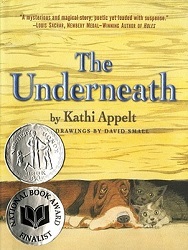 Often, not only in my own writing, but in my students’ too, I’ll get well into a manuscript, and realize that the form is not serving the story well. I’ve read lots of picture book manuscripts that probably should be chapter books, too many rhyming picture books that are fighting with the subject matter and need to be re-formed into straight ahead prose (maybe), and novels that are bogged down because they’re too thin or too fat or too…well, you get the idea. My own novel, The Underneath, began as a short story. That original story was okay, but I couldn’t get past the notion that there was more inside it that I couldn’t see without allowing it to find some room in the longer expanse of a novel.

I once had a student who was a fine poet, and she embarked upon a novel-in-verse about a boy who had a serious accident. The poetry was beautiful, heart-wrenching. The story, too, was inescapably sad. But after several readings, I was left feeling that there was something missing. Finally, we both realized that the form wasn’t holding the story well. And in so many ways, that’s exactly what the form does–it holds the story. Here was a story that needed a wider canvas. It needed more room on the page. It needed a bigger holder.

Writing it in verse left too much white space, and thus the gravity of the story was undermined. Even though it was fine, actually better than fine in verse, when she turned it into a prose novel, the story flew. The subject, added to the theme, needed that broader palette that only a prose novel could give it.

As it stood in verse form, the form was competing with the subject, and what happened was that both the subject and the form were getting in the way of the actual Story. In this case, I intentionally put Story in capital letters because everything should always be in service to the Story. When the form and the subject are competing with each other, the reader begins to notice those and loses track of the story itself. See what I’m saying?

A perfect story (if there is such a thing) is one in which the form, the subject, the style, the point of view, etc. fade until the feeling is tantamount and Story is what is left.

For our workshop at the Highlights Foundation, we’re going to look hard at the various forms of our stories to see whether or not the form feels organic. Moreover, we’ll challenge each other to test the story in forms that may surprise you. In the process, we’ll take a look at genres too.

We imagine people arriving at this workshop with a piece or a fragment or an idea and basically thinking, I’ve got something, but I don’t know what it is. And that we would then be looking at form, by considering what’s possible (while always open to writers trying the “impossible”), but also through the lens of writer intent. What is drawing you to this piece? What do you want to say? What is this about? Where are the hot spots? What are you trying to do? How does this piece highlight your own writerly strengths?