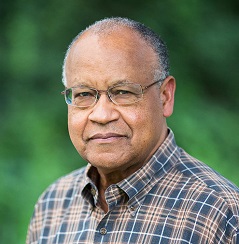 Ray Anthony Shepard is a grandson of a slave, a former teacher, and retired editor-in-chief of a major education publishing company. He is a graduate of the University of Nebraska College of Education and the Harvard Graduate School Education where he received a Martin Luther King Jr. Fellowship from the Woodrow Wilson Foundation. In Now or Never!, his first work of creative nonfiction, Shepard tells the courageous stories of Stephens and Gooding, little-known but extraordinary men whose service and sacrifices provide an intensely personal perspective on the Civil War.

“I write to provide young readers of any age a fuller (not revisionist) picture of American slavery, a corrective history of the struggle and anguish of courageous individuals in the two-and-a-half-century assault to limit full American citizenship to African Americans by ascribing inferior physical, moral, and intellectual attributes to a set of racial features.”