I have yet to meet anyone aspiring to write for young readers who was not, themselves, an avid reader as a child.

For me, growing up at the Pikes Peak Library in Colorado Springs, I, like other young readers, sampled various genres: science fiction, fantasy, nonfiction, humor, adventure, but always circled back to mysteries.

Mysteries for young readers are more than just an adventure. Our heroes and heroines are caught up in an exciting quest. They must depend on their wit, sharp observational skills, and daring to follow all leads and solve a mystery–while avoiding danger, deception, and unforeseeable twists.

Readers are caught up in the quest as well. Can they solve the mystery along with the protagonist? Or is there a plot twist around the bend that they didn’t see coming?

Do we have any idea who “the perp” is as we sleuth our way through the story? Or do we know from the beginning who is guilty, yet still have to find clever ways to catch them red-handed?

What is a mystery story? Something lost that’s found. A secret revealed. An occurrence that’s seemingly impossible.

It’s our job to figure out the who, what, when, where, and why–along with the young protagonist–while also on the lookout for pesky red herrings. 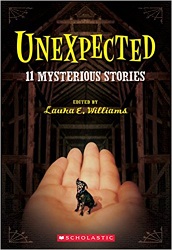 In one of my mystery stories (Sleuth 2500, published by Scholastic in Unexpected: 11 Mysterious Stories), the idea was triggered by a real mystery. As I was moving into a new house, I found a forgotten baby shoe on the top shelf of my new office. I also found a five-dollar bill on which someone had scribbled “In loving memory of Phillip.”

I began to wonder about the families who’d lived in this house before me. Who were they? What were their stories? Their secrets? Who was Phillip and what happened to him?

A story idea was born: What if my character, Kit, is similarly moving into his new bedroom in a new house, and finds a cryptic clue on the top shelf of his closet? Something left behind by a boy his age named Phillip?

What if it leads Kit to discover that something terrible happened in this very room? Something mysterious, sad, and scary? A mystery that authorities had never been able to solve?

What if solving this mystery is now up to Kit?

Some of the best ideas come right out of your own life.

I once heard a librarian say that she always buys children’s books that feature the words “mystery,” “secret,” or “library” in the title. After hearing this, my first instinct was to write a book called Mystery in the Secret Library. 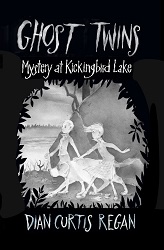 In a recent market survey, I read that, although publishers receive many submissions, they do not receive as many manuscripts specifically for mysteries. Yet, the interest is there and the need is there.

P.S. Icing on the cake: I recently learned that my husband’s great-great grandfather was a Pinkerton. THE Pinkerton. Of the famous Pinkerton Detective Agency. For a mystery writer, it doesn’t get much better than that!

Dian Curtis Regan is the author of 60 books for young readers, including the eight-book mystery series, Ghost Twins, which is being re-released in 2018. Visit http://diancurtisregan.com and http://ghost-twins.com.